This picture is composed so perfectly that one would think these are plastic birds set up in someone’s garden, kind of like the pink flamingos that were popular 60 years ago. Really, I can’t imagine everything coming together so nicely otherwise.

These are the judges comments for Amy’s photograph “Love Is In The Air.” 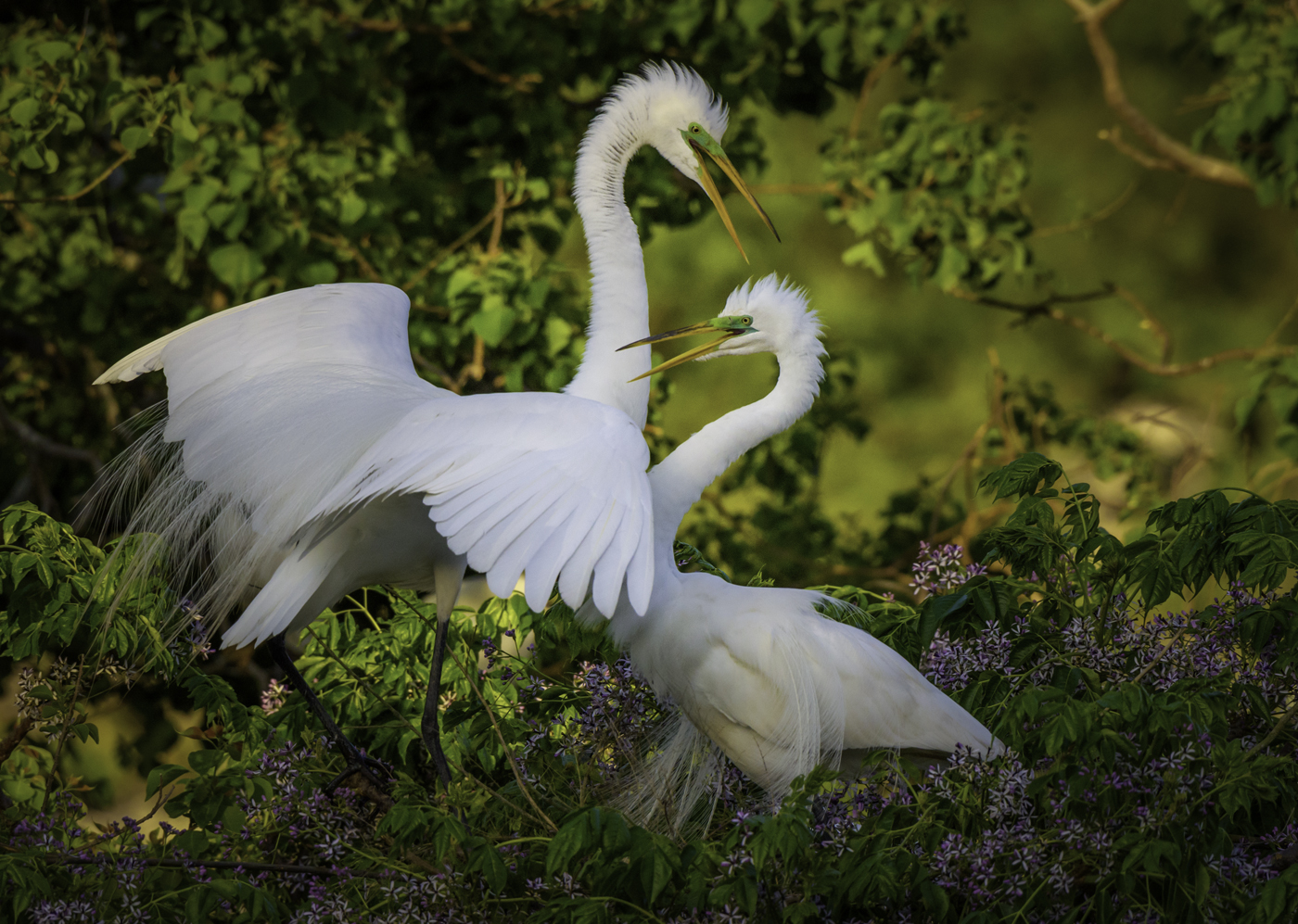 None of the judges “improvements” make any sense to me, which is not to say that there aren’t any possibilities for doing so. I just think they’re on the wrong track. After having suggested a square crop for about every wildlife picture before this, I like this one exactly as it is. In this case, there is visual interest beyond just the main subject. Lots of it. I like how the upper right corner adds depth, and, of course, the purple flowers make the picture.

The second judge appears to be recommending that the photographer change her camera position in order to separate the bird’s head from the background. Nonsense… the birds’ heads are white and the background is dark green. The birds’ heads are sharply focused and the background is out of focus. What more separation do you need? That suggestion also fails to recognize that by moving camera position, the relationship between the two birds changes too… most likely not for the better. They overlap perfectly as it is.

Here’s what I would improve:

You just can’t brighten this image much without blowing out detail in the highlights. Maybe a really, really small amount, but be careful not to lose detail in the feathers. However, you can remove the ever-so-slight bluish cast in the birds. It’s not much, but if you stare at it for awhile (or measure the color using the Photoshop eyedropper), it’s there. Color casts are like that… they can hide behind our brain’s processing of the scene as a whole. With this picture, you can make a rough selection around the birds using the Photoshop lasso tool, feather the edges, and see what happens with the cyan and blue saturation sliders. If there’s any bluish color cast at all, moving the cyan or blue color slider to the right 100 will expose it. After you decide that it’s really there, moving the color slider way to the left should eliminate it – without losing detail.

One other thing that I think improves this picture: I love the purple flowers scattered throughout the foreground. I would hit a few of them with the dodge tool (set to highlights) just to brighten and make them pop a little more. They are so pretty and add nicely to the scene. I described in one of the earlier pictures (the flower with the black background) how the background is so important to the picture. Technically, these flowers are the foreground, but it’s the same idea. It’s all part of the supporting cast around the main subject, and Amy really nailed it with this picture.

This is the last of the PSA competition entries.