These are the judges comments for Derrick’s photograph “Outlet Falls”… 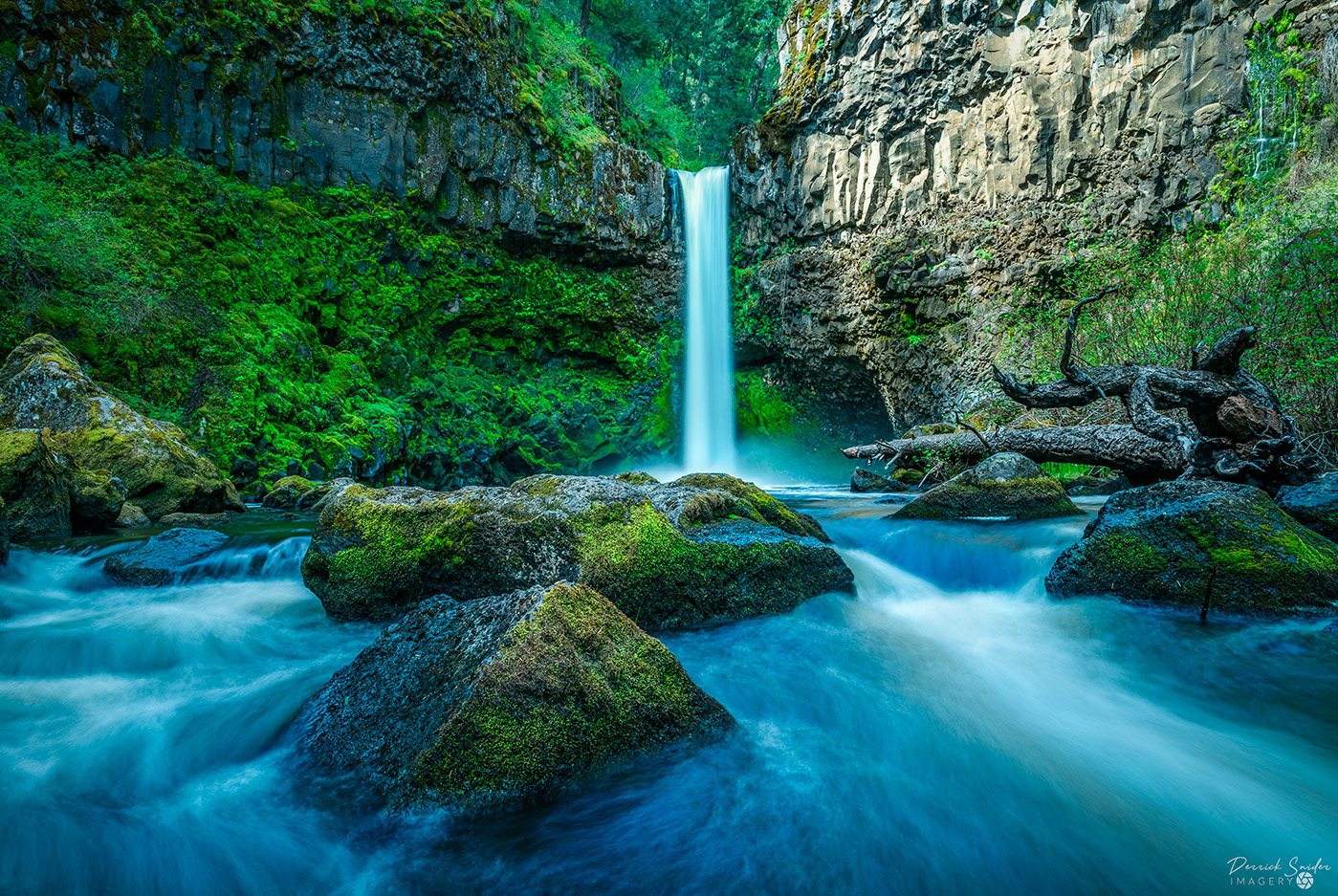 I agree… it is a beautiful scene, and a wonderful long exposure that gives motion to the water. I wouldn’t argue a bit with the composition. There are inherent challenges with shooting canyons on sunny days, whether it’s this scene or our own Colorado National Monument, the contrast between shadows and highlights can adversely impact detail and color balance. Detail can easily get washed out in the bright areas, or plugged in the dark areas. Color of the rocks in shaded areas leans toward blue, while bright light in canyon walls looks more yellow. Some photographers resort to shooting multiple exposures and blending them together in an HDR application. Other photographers hope for a better day or time when a few clouds assist with diffusing some of that harsh light, and serve to naturally balance the exposure. If I had a chance to return to this location, I’d love to shoot it on a rainy day. The foliage would be dripping with color and the contrast would be held in check.

This picture obviously got a push in post-processing. The green is electric. I’m really sort of surprised that none of the judges objected to that. The closest any comment came to the color balance was a mention of chartreuse green. Well, I honestly didn’t know what shade of green is meant by chartreuse so I had to look it up. I don’t think I like it for a landscape picture. But the worst of it is that the color contaminates the entire scene.

Now, remember one really important thing… the photographer may have created the colors in this picture in the fashion of what he likes best. Maybe he hates red, or loves neon green. That’s his prerogative. Color saturation is the most subjective component, and dare say, most contentious part of photography. Nothing lights up a debate like HDR, and the surreal effects that it can have on color. Some professional photographers insist that highly saturated pictures are the only thing that sell.

That said, I look at this picture from my perspective… which is that I want my colors to be rich and, well, colorful, but reasonably natural. It boils down to this: green’s two major components are blue and yellow. The rocks in the sunny side of the canyon of this picture are tinted yellowish-green, while the rocks in the shade on the left are bluish-green. Try to look at those colors isolated from the rest of the picture and you’ll see the color cast. The vegetation is loaded with pure green. The waterfall is tinted cyan, and the foreground water is really blue. All in all, there isn’t much red in the picture which is what that third judge is seeing in “similar values.”

Correcting color balance is almost always an exercise in working in different ways in different parts of the picture… like making the sky bluer and the rocks of a canyon less blue in most of our Monument pictures. However this is a case where the whole picture could be improved by a single step. And Photoshop makes it easy. By the way, all of my edits are in Photoshop but I’m pretty sure there are parallels in Lightroom. I just don’t use it at all, so can’t speak to techniques in that application. But the concept is the same. Once you understand what you’re looking at and trying to accomplish, the solution can be easy enough to execute in about any photo editing software. The hard part is seeing the problem.

Anyway, back to my one step solution for this image. It’s in Photoshop, using the “Levels” adjustment. On the right side of the dialog box, there are three eyedroppers. Select the one in the middle… it’s the one that resets the point at which you apply it in the picture to neutral gray. The theory is that if something in the picture is supposed to be gray, and actually is, then the other colors will be correct. So click on that tool and move the pointer to an area of the picture that should be gray… like the dark rocks in the shade on the left. Click on a few different places and see what happens. You’ll get quite a variation of color for results (some of which are too extreme), but the one thing that will be consistent is that the picture will turn more red. That’s because it was overall dominated by green to begin with and needed red to balance properly. It’s not that the computer likes red better, it’s just working by the numbers to balance color.

If you’ve read this far, thanks for your interest in this discussion. I suspect we’re all trying to make better pictures, whatever that might mean. I don’t claim to be “right” or “better”… I just like to stir the pot with ideas and a different way of looking at things. I hope everyone posts a thought of their own here as well.