For this picture, I’m going to deal with a hypothetical question. How would the image change if it had been shot with a longer focal length lens? In other words, what would have looked different if the photographer had used a zoom lens, say in the 200-300mm range, instead of the 34mm (35mm equivalent) that was, in fact, used for this picture?

These are the judges comments for John’s photograph “Paintbrush in the Park.” 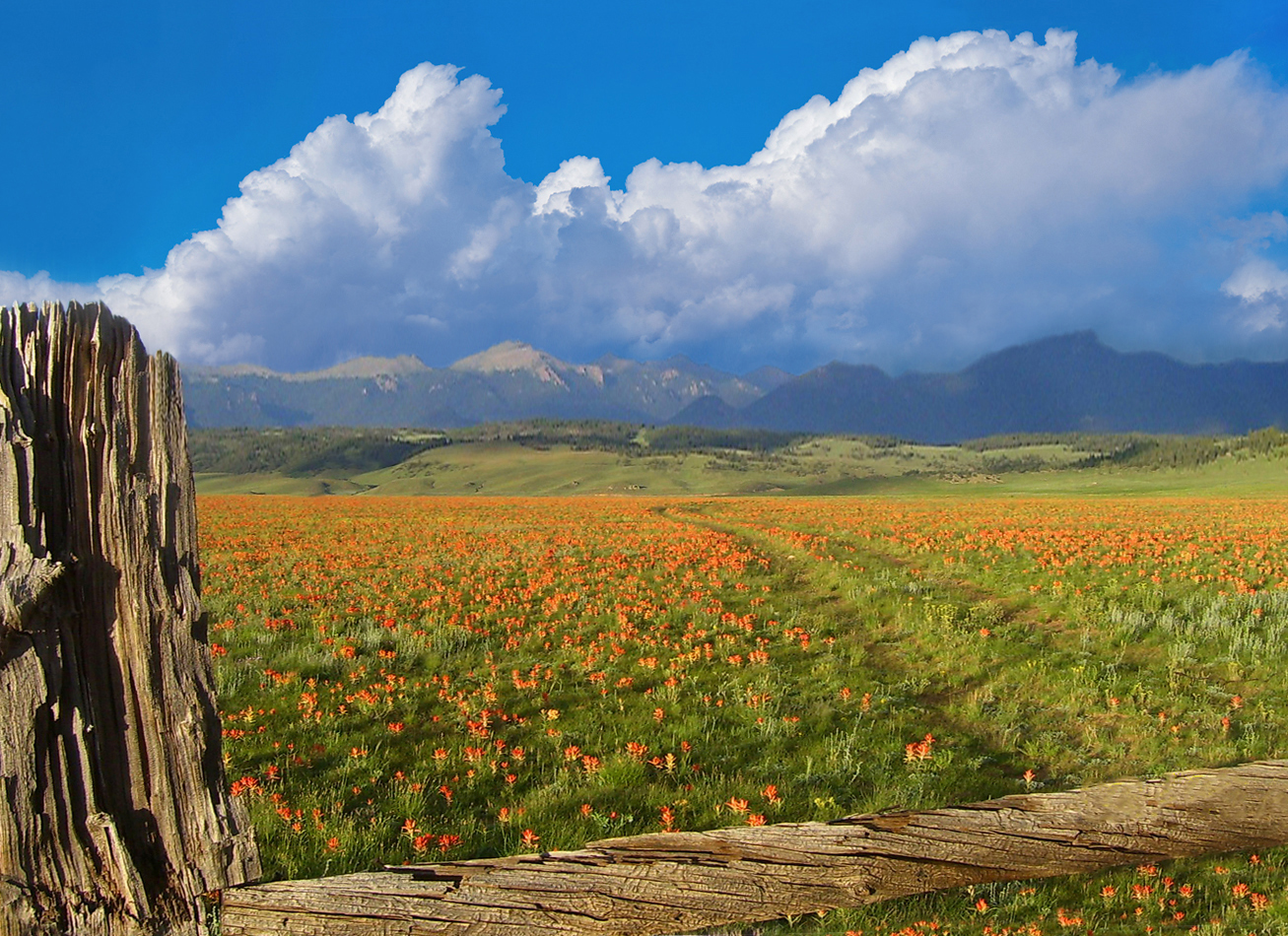 Well, first of all, with a longer zoom lens he wouldn’t have been able to capture as much of the fence right in front of him, or been able to focus on it very well. That’s one advantage of a wide-angle lens… it brings much more of the foreground and background into the frame, and with greater depth-of-field (range of focus front to back) too. But there are trade-offs with a wide angle lens. It makes the more distant elements look smaller. In this case, the fence appears right in your face, but the mountains seem to recede almost imperceptibly into the background. And that’s the aspect of this picture that troubles me. The picture is framed strongly by the fence in the foreground but the background sort of wanders off into nothingness. The sky takes up half the space of the picture, but the clouds too, like the mountains, feel like a faraway thing.

The solution for the mountains is to use a longer focal length lens. The effect of which is to compress the scene and bring the background and foreground closer together, where the viewer feels immersed in both. Unfortunately, as I stated in the first part of this critique, a longer zoom lens isn’t gonna be able to capture the fence as it appears in this picture. I’m merely suggesting that we consider our options and the impact that a choice of lenses has on our picture. Standing and looking at this scene, the possibilities for composition are numerous. As one alternative, we could stand back a little further away from the fence and use a longer focal length lens, in order to compress the background and foreground. Again, it’s a trade off… the fence would not appear like you were standing right on top of it, but the mountains would be a stronger element in the picture.

And there’s always the Photoshop solution, which enables the photographer to pick up where the capability of the camera leaves off. It’s a great way of merging a couple of pictures that take the best of both. The reworked image here shows how that can solve the near-far problem of the original.

Keep in mind, too, that clouds are a critical element of every landscape picture that includes a sky. If half the frame is taken up with sky, fill it with dramatic clouds… or, if they’re not there and you don’t believe in Photoshop cheating, then minimize the amount of space in the picture allocated to your sky. Make sure that your clouds contain detail in the large majority of them. In this case, there are too many vast expanses of what are called blown-out-highlights, or pure white areas of the clouds. This, too, is another subject where trade-offs may be required. If exposing properly for the darker shadow areas such as the fence post, the brighter highlights in the clouds are going to lose detail. If choosing a faster shutter speed, the clouds will look great, but the fence and other shadow areas are going to lose detail.

A few solutions: Buy yourself a graduated neutral density filter, which darkens the sky without impacting the foreground. Some photographers also buy a lens attachment for holding the filter. When I’m in a hurry, I just hold it with my hand in front of the lens. Another option is to hope for a passing cloud between the sun and your subject to diffuse some of the harsh light that causes unmanageable contrast and blown out highlights. It’s amazing how quickly clouds move through the mountains, and simply waiting a few minutes can change the lighting enough to create a perfect exposure. Sometimes just the structure of the clouds themselves solve the problem. The ones I placed into your picture are from a sunny day, but there are fewer washed out bright areas. The last option is to combine multiple exposures in Photoshop.

Lastly, I rotated the picture slightly, using the back row of flowers as my “horizon,” and planted a few flowers below the fence, both of which strengthen the right side of the picture. The center of the picture is typically the easiest to compose… it’s the perimeter of the frame, and especially the corners, that we often neglect in our composition.